Men’s Track Captain Scott Page appreciates both the rewards and the challenges that come with being a Student Athlete and an involved student leader.  As a graduating senior, he also believes his experience has allowed him to truly appreciate the network of support he has built over the past few years here at WSU.

Scott Page, a native of Winchendon, MA., is the captain of the Men’s Indoor and Outdoor Track teams.  He is a former treasurer and project manager for the student organization Enactus.  If that wasn’t enough, Scott also works part-time at the Wellness Center.

We asked Scott how he does it all.  He said he said he has been able to grow as a leader with the support of his Worcester State family.

Scott strongly feels that his experience on the track team has contributed immensely to his personal growth.

“I love the community of all the athletes,” Scott said. “Everyone meets up and talks to each other.”

Scott explained that he is extremely grateful for the resources provided to student-athletes, which ensure that they are able to perform well both in the classroom and in their respective sports.  These resources include Study Hall and assistance with class scheduling, among many other support services.

Scott also appreciates the opportunity to engage with his teammates.

Scott earned the top spot as  MASCAC (Massachusetts State Collegiate Athletic Conference) champion twice during his time at WSU.  He is pictured here with his teammates Justin Lewis (left) and Marcus Vieira (right).

“I love competing and practicing with my team.  I love being a team player,”  Scott said.  “When I wake up, I’m excited to go out there and have fun with my teammates.”

“Working with my teammates has definitely made me a better leader,” Scott said.  “I spend a lot of time with the guys I compete with on and off the track, just hanging out.  We are very family-orientated.  They’ve had such a positive impact on my last four years.”

Scott’s leadership has not gone unnoticed in the Athletics department.

“Scott is a great leader, on and off the track, not only for his teammates but the entire athletic department,” said Kelly Downs, Coordinator of Student-Athlete Support Services and Head Women’s Lacrosse Coach.

“Scott is actively involved in the Athlete Mentor Program and Student Athlete Advisory committee where he leads by example,” Kelly said. “He takes his academics seriously, and he does whatever he can on the track to be the best athlete he can.” 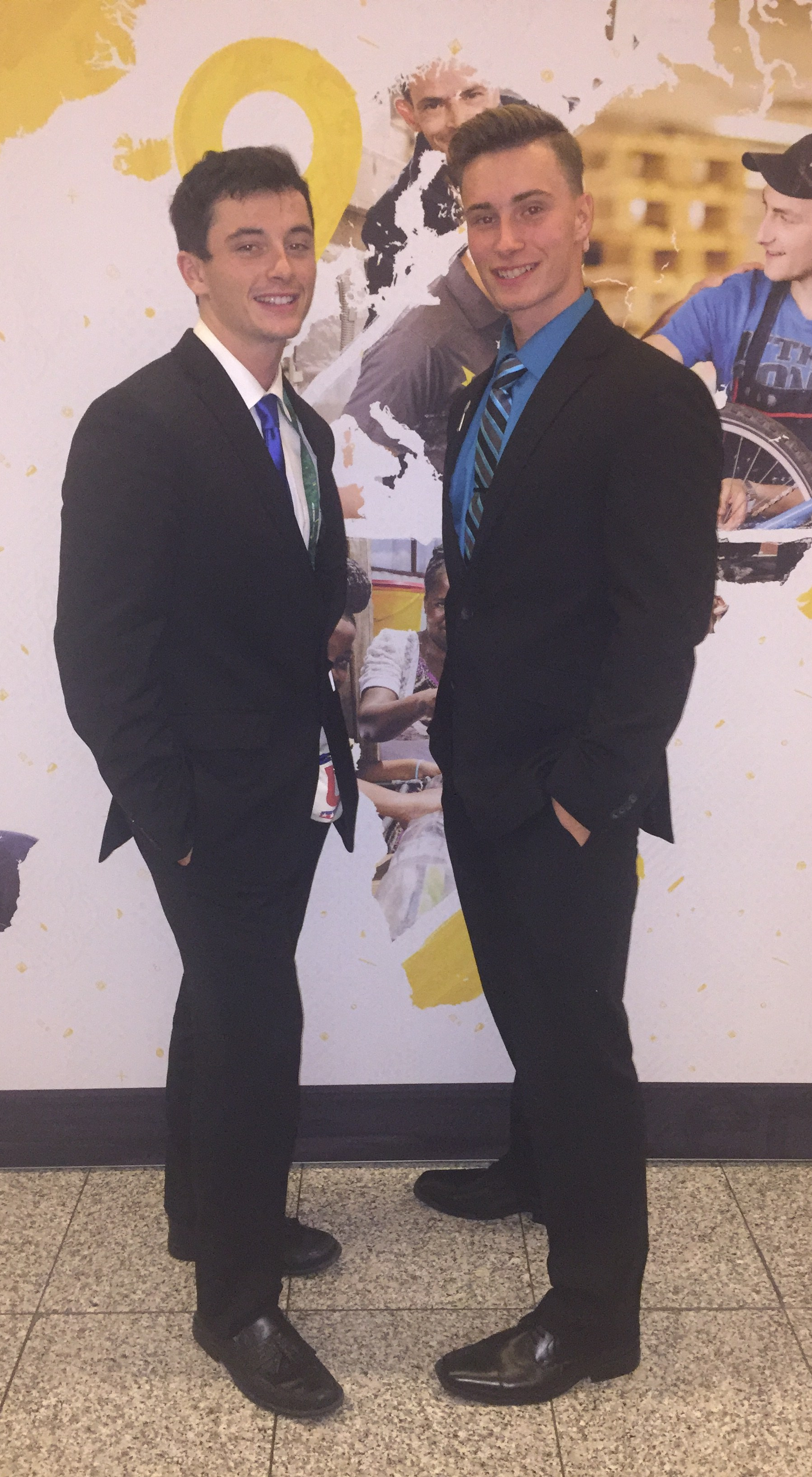 Scott credits his friend Tyler Nims (left, pictured here with Scott) for getting him involved in Enactus.

Stepping Outside of his Comfort Zone

In addition to his responsibilities on the field, Scott became involved with the community service-based student organization, Enactus.  He feels that Enactus created for him a second family outside of Athletics.

“My best friend Tyler Nims encouraged me to join Enactus my freshman year, and I immediately fell in love with the people I met and the things that they were doing.  It was very community service-based.  The Enactus members were my family outside of Athletics.”

Scott decided in his first year at Worcester State that he would run for an elected Executive Board position with Enactus.  He was encouraged to do so by his peers.  However, he shared that he was definitely hesitant at first.

“I was anxious to run for E-Board.  It was my first year in college,” Scott said.  “But I wanted to get more involved, and so I ran for treasurer of Enactus. And I ended up gaining so much from holding this leadership position.”

Developing a Support Network at WSU

Scott explained that he experienced many challenges that come with being a student-athlete, including finding time for things outside of athletics. 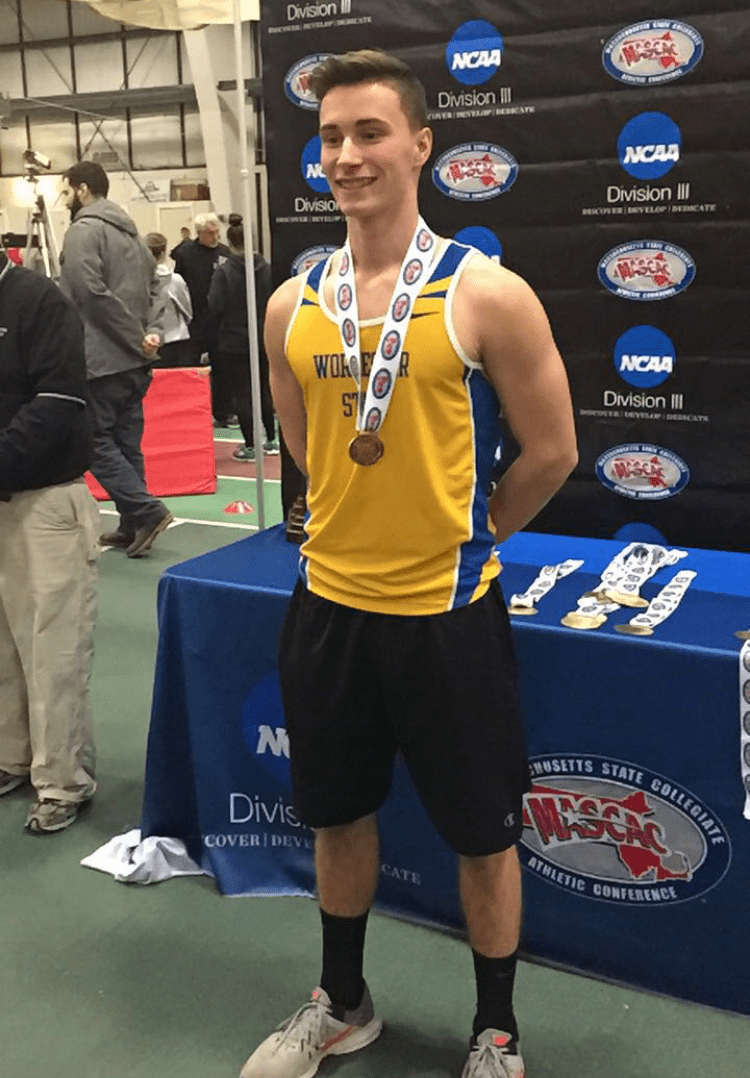 “I’m taking five classes, and I have meets, practice, lifting, and sometimes a second practice that same day,” Scott said.  “Then carving out time for hanging out with friends who are not athletes.  And then, of course, finding time for myself and being able to relax a bit.”

However, Scott was able to overcome his challenges by building a strong community of support here at WSU, which includes his teammates and his friends on campus.

His support network also includes faculty and staff, many of whom he acknowledges for playing a large role in helping Scott manage the demands of a student-athlete.

“Dr. Mahoney [Joan “Jay” Mahoney, Professor, Business Administration and Economics, and Advisor for Enactus] has helped me so much, with classes and everything,” Scott said. “She’s been there for me, and I know she’s also been there for countless other people. Having her help me figure out my degree plan, and having her as a professor in my business classes was great too.”

“Scott is a true scholar and gentleman,” Dr. Mahoney said.  “He is a caring, people-centered servant leader always willing to put others before himself.  He did a fabulous job as Treasurer for Enactus.”

“And of course my coaches,” Scott said. “They have helped me a lot through everything. They have had such a big impact on my time here at WSU. We’ve spent so much time together.”

Despite all of his accomplishments, Scott understands that he is a student first.  He takes his academics very seriously.  Scott will graduate an Honors student with a Business Administration degree (concentration in Accounting and Finance; minor in Economics). He plans to put that hard-earned degree to good use, and we have no doubt that he will do just that.

We wish you the best of luck Scott in your final semester here at WSU.  Please remember that we will always consider you a member of the WSU Lancer Family. 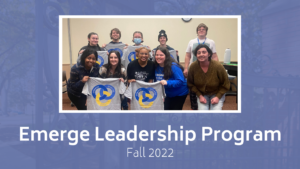 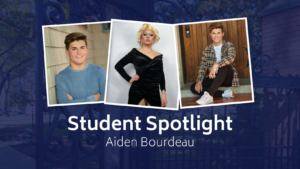